HER SONGS FOR HIM

Read more
REVIEW album SLAS HER SONGS FOR HIM 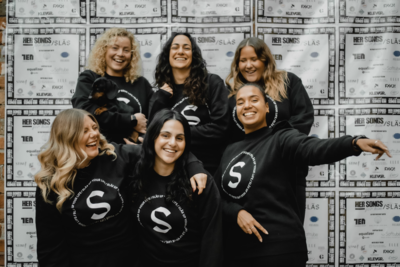 HER SONGS FOR HIM

The first Her Songs For Him writing camp took place in Stockholm in Nov 2021 with participating Scandinavian artists like Benjamin Ingrosso, JUNG, Sandro Cavazza, Omar Rudberg och Alexander Oscar. During 5 days, 27 creatives wrote 28 songs with a producer, songwriter and artist in each room. The praised writing camp is now back for a second round in 2022, which is welcoming producers, writers and artists from across international territories including the UK, Europe, Asia and USA, thanks to an amplified partnership with Sony Music Publishing.

The first Her Songs For Him camp had a big impact and presence in local media and press, with multiple visits and interviews from national radio SR P3 and P4, and articles in music industry press like Musikindustrin.se.

Last year’s camp has also inspired others to similar initiatives, for example GL Music in Denmark arranged ‘Her Songs For Him Copenhagen’ on August 29th - September 1st, also supported by SLÄS.

Spotify statistics show that out of the 50 most played songs in Sweden in 2021 had only 19% female songwriters credited, and only 5% credited female producers. Internationally this looks even paler, with a report in 2021 showing the ratio of male to female producers across the 600 most successful songs on Billboard was 38 to 1, and over half of the 900 most successful songs had no female songwriter credited at all.

The camp is presented by SLÄS with support from Spotify's equality initiative Equal, Export Music Sweden and Hotel Ruth, in collaboration with Sony Music Publishing Scandinavia, TEN Music Group and RMV Publishing and will take place in Stockholm October 3-6th, 2022.

SLÄS is a group of 6 friends and female music executives all driven by a passion to work towards an equal music industry, create opportunities to non-male creatives and give male artists an opportunity to have a more diverse creative sphere. With the Her Songs For Him writing camp SLÄS aim to bring awareness to this unbalance, highlight and lift the non-male talents up, and in the long run change the statistics of female songwriters and producers credited in the charts.