WHO STOLE THE SHOW AT THE FIRST ANNUAL SAGEBRUSH CANTINA MUSIC FEST? 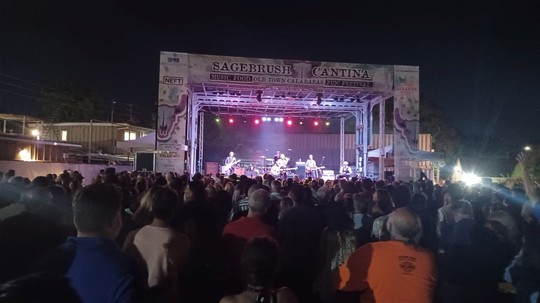 I was visiting sunny Southern California over the weekend and was invited to attend the 1st Annual Sagebrush Cantina Music Festival by my cousins who had purchased VIP passes, a whole new experience for a girl who is more used to smoke-filled rock n roll clubs. That said it was a hot day in Calabasas, yes, the same Calabasas that was made famous by the Kardashians but should instead be known for Sagebrush Cantinas margaritas, chips, and salsa and now the only annual music festival on the west side of the San Fernando Valley.

People late to the party that day should be advised that Sons of Silver opened the outside stage with a killer set of original tunes. The band is made up of players from Candlebox, Skillet, and Pete RG, and saying these players are seasoned is an understatement, this is a seriously solid band with songs that will renew your faith in the church of rock n roll. If you have not heard them before, immediately go to Spotify and listen to the songs from their two EPs Ordinary Sex Appeal and Doomsday Noises. Lead by the raspy-voiced frontman they gave us a hot, sweaty, and dare I say even a sexy set of hook-filled, grunge-rock sounds. Standouts for me include “Who’s Gonna Stop Us,” “With You,” and “Cause Of My Pain” but overall it was a full set of bangers.

Next up was Robby Krieger who has consistently toured and helped keep the songs of poet Jim Morrison alive for more years than I have personally been on this earth. Krieger was never a flashy lead guitar player. He was a strong and steady player in the Doors and remains so today. Original Doors’ band members can never be replaced. That said, all the members of Krieger’s band are high-grade musicians. As talented as Krieger is on guitar, he was happy to step back and let everyone else shine too. The Doors’ created some of the top songs in the American rock lexicon, so any chance to see a Door and a talented group of musicians is time well spent.

As the weather started to cool the Wallflowers took the stage with a mutual feeling of appreciation between the band and the audience. Jakob Dylan and the band melded alternative rock with folk and country in their unique heartland style. Dylan also proved he has quality songwriting chops that live up to the prestige of being the son of a famous father. The band delivered an enjoyable set under a clear star-filled sky.

It was a night filled with tequila-infused cocktails and solid rock n roll.