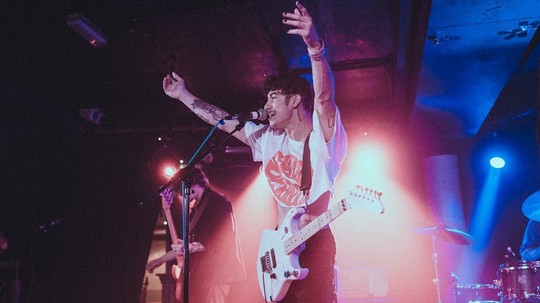 It was a chilly night in Paris when I headed into Supersonic to catch a band called The BRKN, I had been listening to their songs for the last few days but had no idea what to expect from their live set.

Much to my delight, the sheer energy of lead singer/guitarist Jacob Cade’s immediate stage persona won me over almost immediately, I was intrigued. I expected a set of pop songs but instead, I got pop songs à la rock n’ roll with shredding guitar and unbridled energy.

The band has an evident passion for music and the messages in their songs and Cade has a way of making the entire audience feel like they are all his longtime friends. He’s not only a killer musician, he’s also someone that you just want to hang out with, but as talented as he is he was happy to step back just enough to let everyone else on The BRKN shine too.

They manifested enthusiastic energy throughout the complete set, performing solid and slick songs with no choppiness, just the crisp sound of pop-rock. Not once did Cade stop smiling as his uplifting mood spread throughout the club. The BRKN`s performance wasn’t just about music; there was acrobatics involved and nonstop youthful charm.

Song performance highlights are Fake Love, Calm Down, Therapy Session, Coffee, Not The Same, Lying All The Time and Be Cool. Go check them live and online, you will not be sorry.