An Evening Of Heart, Soul And Affection 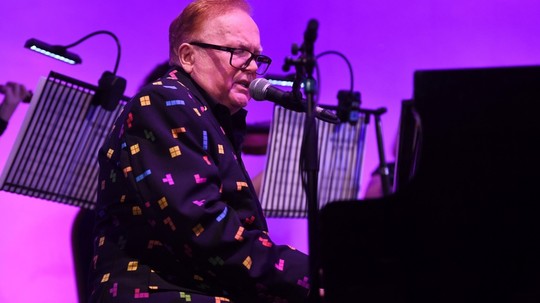 In 1973, Mike Batt’s music came into my life via The Wombles, and there it has stayed for nearly 50 years as he moved on from his furry supergroup to write hits for Art Garfunkel, David Essex, Barbara Dickson, Cliff Richard and Alvin Stardust amongst others. On a Tuesday night at the gorgeous Bush Hall, I finally saw my musical hero live.

The first thing you noticed was the expectation, excitement and wide-eyed wonder of a crowd mostly into their 6th or 7th decades. We were children inside once again as the figurehead of our formative musical years took to the stage. There was a wave of emotion from the crowd when Mike Batt walked onto the stage, the like of which I’ve never seen or felt before at a concert. You could tell from his reaction that he felt the power of the affection from the audience. It was one of the more memorable starts to a concert and he hadn’t even played a note yet. He started with Railway Hotel, a sweetly melancholic song about a young couple. The man wanted to treat his wife to the Savoy because that’s what she deserved, but he could only afford the run-down Railway Hotel of the title. It took me back to the early days of my own courtship of my wife and, for the first but not the final time that night, left me emotional as his words and music tugged at my heartstrings.

On stage, Mike was supported by a string quintet from the Docklands Sinfonia and the marvellous Paula Masterton who sang some fantastic solos. The first of these was one of my Desert Island Discs, the sublime Caravan Song. I had seen Barbara Dickson perform this in concert just before the pandemic, and I was transported by her voice. Paula had the same effect on me with a stunning treatment of a stunning song. Her rendition of the song was naturally different from Barbara’s, but it had the same emotion, the same purity and the same power to move me. It is a song that, in my opinion, should have been a massive hit in the early 80s, and judging by the ovation that nearly raised the roof, I was definitely not alone in thinking that. The Docklands Quintet were note perfect all night and provided the perfect backing to bring Mike Batt’s exceptional tunes to life.

My wife’s own Desert Island Disc featured later in the evening with his performance of Nine Million Bicycles, made famous by Katie Melua. The way that he writes lyrics of such skill and depth is perhaps epitomised by this song about the improbability of finding that perfect person amongst the billions of people in this world. I think that this concert was when I fully appreciated it for the first time. It really is an amazing song.

Mike himself was the most engaging stage presence you could imagine. As he pointed out a couple of times his introductions to the songs during the evening frequently lasted longer than the songs themselves! He clearly spent a lot of time thinking about each song he included and wanted to put each into context. I found each introduction fascinating, informative, sometimes emotional and often amusing. The audience were transported by his words, taken on marvellous journeys through his personal history and given a real insight into the song writing process. Perhaps of most interest to me as an aficionado of Christmas music in all its forms was what Mike said about A Winter’s Tale. My assumption for 40 years has been that it was not a Christmas song, but Mike said it was.

I must at this point mention the superb Paula Masterton again, who sang Guernica, a sad and angry song dealing with the attack on the town during the Spanish Civil War, with such beauty and sorrow. She also did a fantastic job on Round the Bend, a poignant and surprisingly affecting song from a planned Reginald Perrin musical. Her effervescence was irresistible and she added a huge amount of class, style and enjoyment to the evening.

Mike Batt has an ear for a tune that is unparalleled and a way of mining the beauty, humour and poignancy of the human experience that shines through everything he has ever written. He is a single-handed highlight reel of pop music over five decades, so it is impossible to pick out a highlight from the evening. Oh, who am I kidding? At the start of the second half of the evening the unmistakeable strains of The Wombling Song rang out and I was 8 years old again! To hear that, Minuetto Allegretto and Wombling Merry Christmas back-to-back was to be in my own personal time machine. When Mike handed out sleigh bells for audience members to accompany the chorus, I and many others were the disappointed children in a panto who didn’t get the sweets that were thrown out! Despite that, I couldn’t have been more overjoyed to hear my favourite Christmas tune sung by Orinoco himself. The encore started with Remember You’re a Womble, which had everyone in the audience singing the chorus, even the holdouts from the previous Wombles singalongs!

When the final notes of the final song, Bright Eyes, faded away there was a roar of emotion, appreciation and love for the man who has defined our musical lives in so many ways. On behalf of everyone there, if I may be so bold, I want to thank Mike Batt for everything he has given us. Our musical lives would have been infinitely poorer if he hadn’t filled them with so many amazing songs.