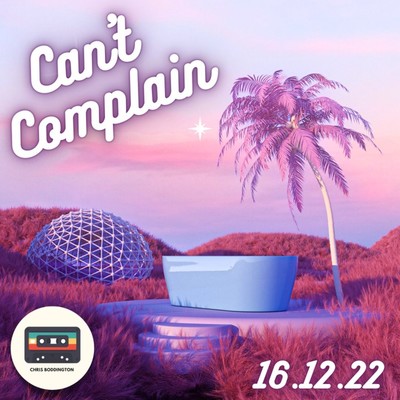 Chris Boddington’s new album is called Can’t Complain. It’s an interesting title, because it can mean fairly good, or it can mean there’s nothing serious wrong with it! After enjoying the tracks, I heard when they were released as singles, I was eager to hear more of this album to see if I agreed with the title!

The first track is called Ayo and it has an unmistakeable 90s vibe. The tune reminded me of Whigfield’s Saturday Night, and it would be just as irresistible in the nightclubs of Europe. I can already see the dance in my head! It has a Latin vibe and a great infectious beat that had me hooked from the first few seconds. This is the kind of track that a DJ could feel any floor with on a sultry Ibiza night. Funk Me Up does exactly what it says in the title. It delivers a slice of irresistible 70s style funk channelled through Bruno Mars. What a superb tune this is, one that Earth, Wind and Fire would be very pleased with. This could sit on the soundtrack of a 70s movie or a Starsky and Hutch soundtrack with no problem. Bring Me Back shows the versatility that Chris Boddington possesses as he moves into harder beats with a slice of UK life rap over the top that is brilliantly delivered over another danceable tune. This one, however, is an end of the night track to bring the tempo down while still keeping people on the dancefloor. It is a song that will reward multiple listens as it works it magic on you. Ground ‘n’ Pound wraps up the first half of the album with another rap, but one which owes more to the US. When artists like Chris Boddington who have such a range of influences pour them into an album it risks becoming a collection of unrelated tracks, but this isn’t the case here. Chris has a real feel for the way that the album fits together as a coherent whole and has crafted 4 completely different but complementary tracks for ‘Side 1’.

'Side 2’ starts with The Beat Won’t Stop, an R & B inspired track which pulses through your head and includes a really interesting voiceover that reflects on the importance of music and the way it affects us. It’s a clever diversion and one that works beautifully in the context of the track’s beautifully constructed tune and rhythm. Here is someone who has a feel for music that stands comparison with anyone else working in dance. Chances is a jazz influenced track that uses brass to brilliant effect and just bounces along with verve and intensity. There are definite Ska elements coming into play here as it takes you on a journey from the smoky rooms of the US to Cuba. It is an irresistible piece of music that is my favourite track on an incredibly strong album. The penultimate track is Turaco, another track that is another melting pot of influences which show, once again, Chris Boddington’s ability to work with a tune in absolutely any genre. It’s the perfect foil to Chances having a similar sense of rhythm but once again taking his talent in another direction. The final track is a pounding remix of Ground ‘n’ Pound with a harder edge and it succeeds in bringing the music forward in the mix to great effect. As the lyrics tell you ‘The party won’t stop’, and this album makes sure you can keep it going whatever your crowd.

Suffice to say, I absolutely loved it, and if you enjoy dance music of any genre you need to search this out as soon as it’s released.