'Letters To Everybody' Depicts Humanity And Human Stories 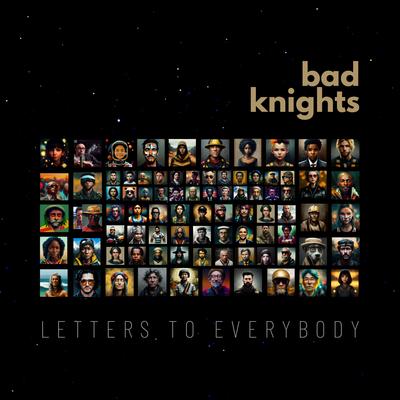 The stories that we gravitate to the most are the ones that put a spotlight on the human experiences in all it's joy, messiness, beauty, and sorrow.

That's what the band Bad Knights' debut alternative and contemporary rock album, 'Letters to Everybody,' takes into consideration. The songs beam with a real rawness that most don't think about.

Of the 15 songs on 'Letter to Everybody," 2 stand out the most, the first being the alternative and soft rock "Mr. Suicide Man."

The song is hauntingly beautiful as the lyrics take you through a story of a man on his way to a bar coming across a man about to jump off a bridge. The song is a conversation between the two, with the man on his way to the bar trying to talk Mr. Suicide Man down. He sings "He’s just doing what he can/ Another sad man, still kicking his can/ But now it’s tomorrows plan." The most interested part of the song is that you don't know if the character Mr. Suicide Man took the leap, you finish the song wondering whether he's ok or not. The song touches on the subjects of depression, mental health, and suicide.

The second song that stands out is the contemporary rock song "Like Knox." The song finishes the album on a positive note about love. It's a fable about a young couple enduring life’s hard times, finding true love, and riding away into a starry sunset. This couple goes through the ups and downs together, big and small. Eventually they realize they want to escape life's monotony and drive off into the sunset to start a new life.

'Letter to Everybody' is one for everyone who enjoys quality songwriting.

Bad Knights · Letters to Everybody