On ‘Painted Shut,’ the sophomore LP of Philadelphia freak-folk-rock wunderkinder Hop Along, we are gifted ten songs of brilliant storytelling and musical prowess. Three years after their debut LP ‘Get Disowned’ planted its weird and beautiful roots in the world, the band’s reputation as a unique prospect has flowered among those tired of a plethora of homogenous and bloated rock bands: ‘Painted Shut’ delivers the fruit in wheelbarrows. 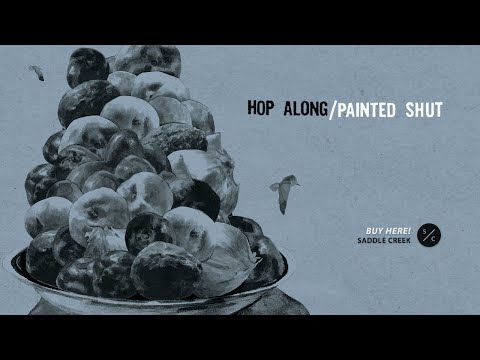 The band’s progression from ‘Get Disowned’ is palpable. To any of the many for whom that record held a peculiar and wonderful power, it may seem odd to claim that there was much, if anything, to develop upon. But instead of expanding, the band have turned inwards, gathering the weirdness of instrumentation that sprang out of their earlier songs and reining that energy into the intense spirit that drives this record.


To a superficial listen, 'Painted Shut' would seem more of a ‘straight-forward’ rock album, with bright guitar riffs and spry drums forming the body of the songs, but listen closely and the quirks of style show that wonderful weirdness alive and well, only now with a greater sense of purpose.


The unique brilliance of ‘Painted Shut’s' approach to guitar rock is abundantly clear as opener "The Knock" reaches its climax: there is a vitality to the riffs, a majesty to the melodies that has the apparent effortlessness of the greats, and this is clear throughout, be it the surprisingly funky "Powerful Man" or soaring, raucous closer "Sister Cities". Theirs is an ineffable quality that your head may not understand, but your gut certainly will.

Not every song has that explosive catharsis, as should be the case so as not to cheapen the experience; wistful elegance punctuates the record on pared-back musings like "Happy to See Me", keeping the impact of louder tracks intact. One of the greatest abilities of song is to make sadness danceable, and ‘Painted Shut’ does it like the best of them, be it a sway or a frenzy.


Lyrically, ‘Painted Shut’ is best compared to short story collections like Joyce’s ‘Dubliners,' giving song to the innermost struggles of its characters as they grapple with the enormity and exhausting minutiae of modern life. Where "Get Disowned" mostly stood apart from its subjects, painting human experiences with a stranger’s detachment, ‘Painted Shut’ finds its isolation in the opposite perspective: deep within the individual experience. It is an intensely personal album, expanding private moments into world-shaking events: on "Happy to See Me", a father gets up at 4am to post a motivational video on YouTube, crying: “People of the world, nobody loves you half as much as I am trying to.”


On "Horseshoe Crabs", the crushing tale of Jackson C. Frank’s struggle with mental illness is encapsulated in one line, devastating and bleakly humorous as only the darkest of struggles can be: “woke from the dream and I was old, staring at the ass-crack of dawn.” Lead single Waitress is a fantastic storm in a teacup, as the narrator sees a group of acquaintances who, they assume, must hold them in disdain for “the worst possible version of what [they’d] done,” crying out against the hyper-connectivity of modern life: “the world’s gotten so small and embarrassing.” Frances Quinlan’s untouchable vocal performance pulls off something remarkable on these songs: it expresses the personal magnitude of objectively small experiences.


When her voice reaches its breathtaking, ragged peaks, nothing else exists but the thoughts and emotions on display: just as that breakup when you were 15 really did feel like the end of the world, so too does the moment when the police knock at your door momentarily subsume your existence.


On ‘Painted Shut,’ the modern soul is cracked open. On no other record will you find a vocal performance more stunningly visceral than that of Frances Quinlan, neither will you find the vitality of instrumentation laid down by her, drummer Mark Quinlan, bassist Tyler Long and guitarist Joe Reinhart. It is a truly singular experience, a glorious reminder of music’s capacity to move mind, spirit and body with story and song.