For those not so well versed, Earl Sweatshirt is an American rapper/hip-hop artist who’s part of the music collective Odd Future, headed up by Tyler The Creator, as well as containing the likes of Frank Ocean. His new album titled 'I don’t like shit, I don’t go outside' is the follow up to the previous, very successful album 'Doris'. 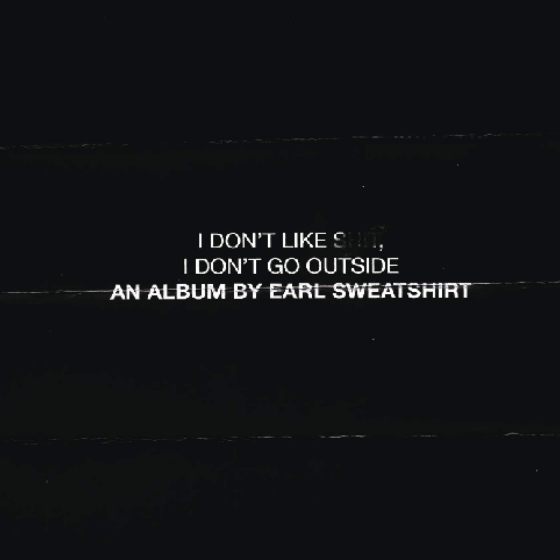 If you’re looking for an energetic hip hop album, and you haven’t already realised from the title, then let me tell you now, you’re in the wrong place. This is an album which, if nothing else, seems very honest as to where Earl Sweatshirt is in his life. The lyrics are deep and raw, the instrumentals are often downbeat and most of the hooks and choruses are rapped (at times just spoken) rather than sung… but don’t lose faith in this LP yet.


You need to listen to this album with an open mind, and be prepared to pay attention not just to the beats, but the full package of what this album is about, and if you do so, you’ll find a few gems.


One of the more interesting tracks on the album is "Faucet". When I was listening to it, I couldn’t help but feel as though the instrumental on this shares some similarities to that on Taylor the Creator’s Yonkers, but the magic of the song lies much deeper. Earl cites his inspiration for this track was when his mother sent him to Samoa after he “outgrew” his home. In reflection to this and throughout the album, Earl seems to be expressing a lot of internal emotion, at times anger, but not in the conventional and possibly expected hip hop style of getting mad, but through these dreary, depressing, but refreshingly simple beats.


The appropriately named "Grief", if hasn’t been made obvious already, gives a great understanding as to the type of tone this album has been written in. It’s a track that sums up the album brilliantly with a simple beat, spoken hook, and deeply emotional lyrics, as well as a contrasting outro.

He then moves onto something different with "Off Top". This is probably one of the most enjoyable tracks on the album, where Earl not only continues the emotional vibes we’ve already seen demonstrated, but also some pretty witty bars as well, my favourites being “…I been in trouble since I stumbled out the stroller… I been like this since the Motorola Razr”.


This album cites a few features, the most effective, for me being the style Dash employs on "Grown Ups", something I haven’t heard too much of on other albums in recent times, or at least not used to the same effect. This is also aided by the killer beat used on this song, which rolls up into one of the stand out tracks to this record. I can’t say I enjoyed the other features such as Wiki’s on “Am/ / Radio”, with it coming across as slightly immature and shallow compared to the verses Earl was dropping on the rest of the album, and indeed on this song.


I personally, wasn’t expecting a big energetic album, and although many people I know aren’t fans of Earl Sweatshirt, I like this album for the reason that it’s one that no matter how gloomy the outcome was going to be, he still kept it personal and true. Without the, at times worryingly depressive bars, this album would be a hollow LP with no weighting at all.


Overall, it’s a solid follow up to Doris. This album changed my perception of Earl Sweatshirt, from a rapper who at times bored me, to one who intrigues me and in turn also entertains me.


If you’re not interested in listening to the finer details to Earl’s lyrics, and becoming immersed within his rap, this album may not be for you. Alternatively, if you’ve never gone through any depressive emotions and you’re totally contempt with your life and always have been you may struggle to relate in any way. But for me, this album is more relatable than others I’ve heard come out of hip hop recently and I feel as though it’s one that carries weight. Put in the effort to this album and you’ll get your just rewards… as well as your money’s worth.


To find out more about Earl Sweatshirt click here.