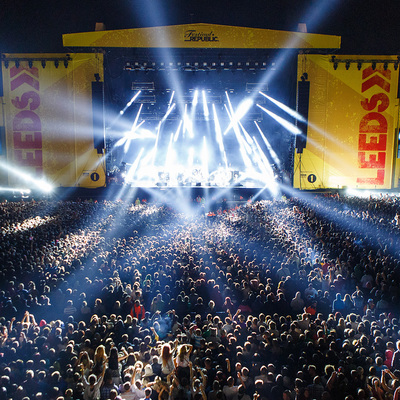 It was dirty, mental and full of enough hormones to reverse menopause, Subba-Cultcha hit Leeds.

So the hordes of young folk clamoured to Reading and Leeds once more. Being the day after GCSE results day and a week after A-level results it definitely had a few people knocking about with E’s. But luckily the two centres of euphoria had some pretty confident babysitters to keep the rag-tag bunch of hormones in check.


The weekend kicked off with a handpick of up and coming bands. Glaswegian female duo HoneyBlood’s bluesy tracks about the pitfalls of the opposite sex seemed to ring clear amongst the crowd. The negative feelings were easily dispelled by Superfood with tracks like ‘Bubbles’ and ‘TV’ providing a party of 90s guitar pop that makes you yearn for the full debut. Finally Toy brought the crowd to such pumped up states with their clever rock that the only option was to head to the late night festivities the festival has to offer.


Being the first true day of the festival the choices on artists to see were undeniably hard to make. Though if you ventured to the NME/BBC introducing stage for Jungle you would be far from disappointed. The bands cool clean sound is grander than any debut album should pop, a true groove causes the crowd to flail as if they hadn’t only had 3-4 hours sleep.


Clean Bandit benefited from the warm up provided, which the extremely over played ‘Rather Be’ being a big sing-a-long and old hit ‘Mozart’s House’ is the only song that really competes with the funk that Jungle had so effectively laid down. Later in the day The Kooks took to the stage, new singles ‘Forgive and Forget’ and ‘Around Town’ show why the new funk laden direction was a positive move, but old classics ‘Naïve’ and ‘Seaside’ still prove to be the biggest crowd pleasers.


Sadly The 1975 despite their mass of adoring female fans, seem to fall flat, with each song sounding like a B-side to ‘Chocolate’ it appears the main attraction of the group is lead singer Matt Healy himself. But things pick up on the main stage where surprise smash hit Macklemore bounds about the stage like he owns it, of course it builds to the inevitable ‘Thriftshop’ where everyone who managed to raid the Oxfam/charity shop like stalls early on proudly strut about the field feeling as original as ketchup on chips.


Headliners Blink-182 appear to be in a time loop. They dance about the stage, telling jokes about penis’ and farting like they were still in their early 20s, as nostalgic as this is, after so many years it’d be nice for a change of pace from time to time. But when this means that classics such as ‘Rockshow’ ‘ First date’ and ‘Always’ still sound fresh then you have to commemorate their dedication to pretending they’re not middle-aged men singing about hoping their girlfriends parents aren’t home.


Though on the complete end of the age spectrum, Disclosure looking like they’re celebrating a successful set of A-level results bring their brand of House music to the masses. ‘Latch’ and ‘White Noise’ can’t help but bring the crowd to their knees, it nearly blows the tent off, this is truly the clientele to their beats and whistles, hard to believe this all comes from two brothers stood behind desks. It’s stripped back but my goodness does it feel all the more effective.