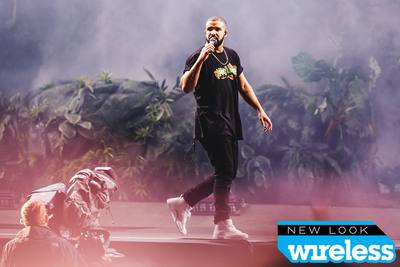 With a festival so dependent on having huge headliners to pull in the crowds, Wireless festival never disappoints with their array of acts. Boasting the likes of Drake, David Guetta, Nikki Minaj, Jessie J and Avicci, the sold out London festival was set to be huge from the get-go.

With scorching temperatures of 30 degrees, washed down by £8 doubles whilst watching some of the best urban artists today of varying stage presence, Wireless was often quite like a bag of Pick ‘n’ Mix– there was a chance you could get a pretty damn disappointing one (who even likes the foamy bananas?) but, mostly, you were in for a treat.


Once you get to Finsbury Park, you’re immediately overwhelmed by the sea of selfie sticks, Tesco value vodka bottles lying around and gold tattoos adorning the masses of 20 year old girls. In fact, Wireless has to be one of the most look-conscious festivals I have ever been to – the lads are on the pull with their too-small vests and the girls were catwalk ready with their perfectly composed outfits, flower headbands and fake eyelashes.


This doesn’t mean the festival goers aren’t ready to get down and dirty to music for 10 hours – when Drake showed up on the first day, Wireless went for it with full force. The sub-headliner before him, A$AP Rocky, hadn’t established the perfect setting for Drake, with sleepy, dreamy tracks like 'L$D’ being awkwardly placed in between heavier tracks like ‘F**kin’ Problems’, resulting in the singer even having to tell the crowd to ‘Wake up!’ But Drake, with his slick, cool charisma radiating on stage was perfectly paired with his smooth vocals as he took the crowd through hits like ‘Hold Up, We’re Going Home’ and ‘Know Yourself’ from his newest E.P ‘If You’re Reading This It’s Too Late’.


Even those not existing fans of the Toronto-born rapper were putty in his hands, shaking like jelly in the 50,000 strong crowd, loving the guest appearances from PartyNextDoor, Skepta and ILoveMakonnen. ‘This is the greatest crowd I’ve ever played to”, Drake continuously announced, with a huge smile beaming on his face – judging by the smiles reflected on the crowd, it was obvious  that the feeling was mutual.

Saturday, overall, was the weak link in the three day festival. Headliner Avicii was underwhelming, and Kendrick Lamar was ‘nice’ at best. Gorgon City tried their best with their pulsing house beats – but Stormzy, on the Capital Xtra Presents stage, was the true star of the day. Whipping the crowd up into a frenzy with his grime-only set, the London MC showed even the headliners of the day how it should be done. Attracting the biggest crowd on that stage I had seen all weekend, his pal Dizzee Rascal even joined him for the set – mosh-pits were appearing all over the place while every single person there jumped up and down as he blazed through his 30 minute set.


Day three, with some menacing clouds above, was kick-started by Jacob Plant, London-born DJ. Massive hits across the decades were propelled to new, anthemic heights, as each flick of his hand on decks or each twist of a button made for a flawlessly mixed set and gained expert control of the crowd. It was infectious: crowds of people at a time were hypnotised to the sounds blasting from his modest stage tucked away at the back.


Another ferocious performance came from recently hospitalised Jessie J. Advised not to perform by her doctor after some undisclosed surgery, Jessie J showed not one glimpse of backing down from a full performance. Cracking jokes, interacting with members of the crowd and ultimately belting those golden vocals out at every opportunity, Jessie J smashed it.


It definitely says something when Jessie J can give such a solid performance after being seriously unwell and Nikki Minaj, the next headliner, couldn’t make it to her set – in fact, she missed the entire duration and just played a couple of songs with David Guetta. Both utterly underwhelming, with David Guetta playing a boredom-inducing DJ set of uninspiring commercial house and an embarrassing amount of “Hands in the air!”, crowds didn’t stick around for long. In fact, he was so naff I didn’t realise it was a multi-million single selling DJ and record producer – I thought it was some half-average middle-aged dude filling in for Nikki Minaj.

No, not the glorious ending Wireless had hoped for. But that became expected: Wireless’s strong headliners had no guarantee for greatness throughout the weekend. Sometimes, it felt that something was missing: whether it be like lack of festival atmosphere, the hit and miss headliners’ performances or the lack of interest for the less known artists.


Politically-fired George the Poet, for instance, should have had way more appreciation for his raw, brutally honest and thought provoking rap set. But, other times, Wireless fully delivered with its top pick of artists throughout the weekend and its no-judge attitude: I never felt embarrassed, awkward or nervous to bust out some questionable dance moves, nor did I feel I couldn’t talk to anyone there. No, Wireless is not the cringey, adolescent festival I thought it would be - but it’s not quite the epic festival is could be either.