Love Stuff is the debut album from U.S. singer Elle King and follows her acclaimed self-titled EP in 2014. 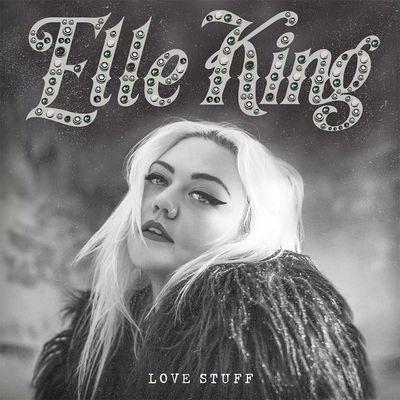 Elle King, a 26 year old who grew up in Ohio, the daughter of comedian Rob Schneider and former model London King has produced what could be one of the best debut albums of the year. Elle became the darling of the American radio stations recently with her single ‘Ex’s and Oh’s’ and was the first female solo artist to attain number one the US Alternative charts for 17 years! Thats a great way to start your music career and whilst the single is on the album its not the ‘be all and end all’ of ‘Love Stuff’.

The rawness, grit and soft sweetness are on show in equal measure and the opening tracks of ‘Where the devil don’t go’ and ‘Ex’s and Oh’s’ are stripped back thumping, catchy, Black Keys influenced stomping singalong alt rock tunes. Its an impressive one two punch in the opening round.

Then we get enticed in by the sexy smooth ‘Under the influence’ showing a different style, almost Adele like in its cool undertones of a wannabe Bond theme.
Last Damn Night is a collaboration with Mark Ronson on fuzzy guitar, Patrick Carney (Black Keys) on drums and it was cut at Sun Studio in Memphis of all places. Its straight dirty blues rock - “When the clock strikes 12 we’re all going to hell”, it could be Brian Johnson of AC/DC singing that lyric and a key musical influence of Elle King’s early years was his band (she has ACDC tattooed on her bicep).

Having been blasted apart with the early tracks we get a soft sweet banjo based duo of ‘Kocaine Karolina' and ‘Song of Sorrow’. I can’t listen to these without thinking Mumford & Sons but knowing that King has used her banjo as a composition tool in the past, this isn’t just to appeal to the current fad of alt folk rock. The tracks ooze a beautiful lilting softness and completely change the mood of this album, showing a different side to King’s brazen, reckless steely attitude evident in the opening salvo.

Then we get what should be her next single, King tells us in no uncertain terms that she isn’t an ‘American Sweetheart’ and she’s not the girl you should be falling for - she likes whisky, boots and bad tattoos!. Its a pop country crossover corker that should be hitting top 5 in the states and probably this side of the pond too.

King has vocal influences of Amy Winehouse, Aretha, maybe even the ghost of Janis Joplin, and its all rolled into this soft velvety rasp that effortlessly make the hairs on your neck stand up and shout for mercy. ‘Ain’t gonna drown’ is a prime example of this, a desolate song about loneliness and looking for miracles to survive. ‘Jackson’ follows in much the same vein and this is where we get to see King’s deepest and darkest side with an opening line of ‘Mommas dead and gone’ she’s going to hell and will be taking us all with her.

Its a shame that we then get a relatively bland love song in ‘Make you smile’, its pleasant enough but not a patch on either the sweetness, or, grit and raunch of all the others, it didn’t make me smile! but closing the album with just Elle and her acoustic guitar singing about being with someone for the last time on ‘See you again’ is a beautiful finish.

So it’s all about the ‘Love Stuff’, and both the light and the shade on this album are there for everyone to hear. Elle King is one talented lady, and this album is probably one of the finest debuts this year, she’s not an American Sweetheart, she’s an ass-kicker with a heart.

Love Stuff is released on September 18th 2015 and Elle will be touring the UK with James Bay in September and October.