How Big How Bold How Beautiful

Florence And The Machine

Florence & The Machine's 'How Big, How Blue, How Beautiful' Is Surely Undeniable 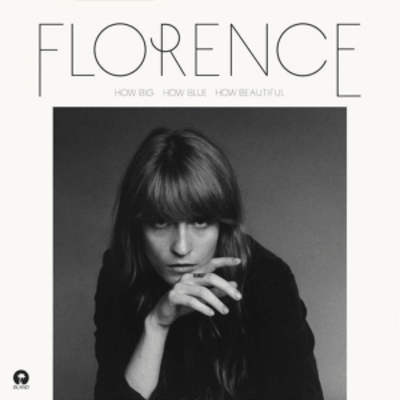 How Big How Bold How Beautiful

Florence And The Machine

Rarely is a title as apt as the one Florence Welch has chosen for her third album. If, in some seminar exercise, a student were asked to “sum up the music of Florence & the Machine in three words or less”, I can imagine their vague face chiming back, “big, blue and beautiful.”

Florence & the Machine are known for being massive, melancholy, and magnificent. Their vast and bombastic love songs have straddled the globe twice over, and what has earned them adoration has also provoked the opposite. Florence Welch is as in-your-face as pop singers get, bellowing infectious melodrama over preposterously diverse instrumentation - harps, garage rock guitars, EDM-banger synths – and for some this is just too much. If, for whatever reason, she doesn’t do it for you, then she isn’t going to do it for you on a brain-busting scale. In light of this, it was perplexing for many when her third album was supposedly going to be a stripped-back, low-key affair. Spoiler: it isn’t.

'How Big, How Blue, How Beautiful' is a loud album. All but a couple of these songs are packed to the brim with orchestral artillery: brass blaring, strings wailing, drums crashing, and this is to say nothing of Florence’s voice, like a foghorn from classical antiquity, all wondrous melodies blasting out with palpable force. Hers is truly a unique voice in pop music, flattening all contemporaries in character, volume and beauty so that, when it’s on, it is impossible to think of any other. In this respect, nothing has changed from what we have already experienced of Florence other than a natural growth in confidence.

This however, might seem a contradiction, as Florence has explained that this album came out of a “crash landing” into reality from the years of nearly ceaseless touring and recording since her debut, Lungs, in 2009, but there is a sense here that this exposure of a fragile self has not shrunk her, but bolstered her into bolder lyricism and performance. This is obvious in the tracks that are most true to the claim, that 'How Big', is a more direct, less florid Florence, like the attention-seizing lead single "What Kind of Man". It is a behemoth of a track, launching from ethereal, Gazelle Twin-esque layers of voice into a stomping riff and braying horns, whilst Florence is at her most plain-spoken: “What kinda man loves like this?” She roars in a voice, dripping with a threatening coolness. Here is a genuinely new aspect of Florence, the charming pseudo-menace of ‘Kiss with a Fist’ matured into a lean, dangerous new beast, and it is thrilling to listen to.

Elsewhere she is more familiar. Opener "Ship to Wreck", sticks to the water-based metaphors of Ceremonials, capturing insomnia impressively well. "Delilah" continues the tradition of classical characters littering her work, and "Caught" is another masterclass in the sway-singing pop ballad. "Third Eye" is a standout not only on this record, but in Florence’s whole catalogue. Spines tingle from the first note, and the lyrics, fiercely protective of their addressee, are as impactful as the singing itself, all the more so for being profoundly personal in a manner not of the usual romance format.

On top of this, I’ve rarely heard a song with this many individually catchy hooks, and when they all converge at the climax I defy you not to marvel. In a surprising turn, "Long and Lost" has Florence singing in a hushed tone, something that will make many blink twice. Although it is beautiful, it is difficult for its quiet tenderness to take hold in an album full of such whale-snagging hooks.

The arrangement of the orchestral elements here by Will Gregory of Goldfrapp are worth singling out. In the tracks where they take centre stage they overwhelm with a subtlety and depth uncommon in orchestral elements found in pop: they are not treated as a novelty, but as the soul of their tracks. As Florence herself gushes about the brass section that closes the title track: “the trumpets at the end of that song, that’s what love feels like to me. An endless brass section that goes off into space. And it takes you with it.” Hyperbolic it may be, but this is hyperbolic music, and true to her word the brass really transcends. It is reminiscent of the soundtracks of Joe Hisaishi in its evocation of awe at the beauty it attempts to paint. Marcus Dravs’ grand, broad production has clearly been instrumental here too – he is known for his ability to curate vast spaces for instruments to soar within, and How Big is no exception.

So exactly how big, blue and beautiful is this record? It is undeniably vast, an open sky filled with the explosive sounds of the heart; it is markedly less blue than Florence’s previous work, as hope and defiance take the place of love and lovelorn distress; and its beauty, though obviously subjective, is surely undeniable. An apt title indeed.