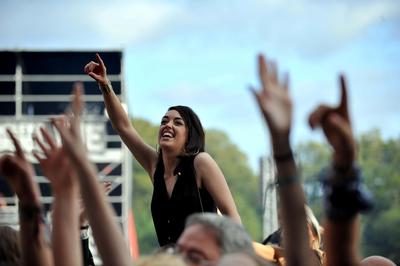 Bingley Music festival takes place in Myrtle Park, more or less in the centre of the town. To be honest I was expecting another Kendal scenario, involving badly informed stewards and gate problems, together with never ending traffic chaos. I couldn’t be more wrong. Within an hour of leaving Manchester I found myself in the press tent all passed up and ready for the weekend.

The festival consists of two stages and a small acoustic area. The main stage is quite impressive and was quite full when I finally walked out into the pit to catch my first act of the day, Gallery Circus.


The group consists of Identical twins, Daniel and Graeme Ross who, to be fair, put on quite a powerful show.  It’s still beyond me how they manage to pull off such a sound with just drums and a guitar. Mind you, there’s another combo in the charts at the moment doing the same thing, so it may become the norm.


Next up it’s the Beat. I saw the original line up support David Bowie back in 1983. Today’s version consists of original member Ranking Rodger on lead vocals, helped by his son Ranking Junior.


But it doesn’t matter who is up there, as the audience loves it. I can’t say I blame them either.’ Too Nice To Talk Too’ and ‘Mirror in the Bathroom’ are seriously addictive tunes that will stay on play lists for some time yet. Nice performance to get everyone in the festival mood.


It suddenly dawned on me I was missing out on the second’ Discovery’ stage acts and made my way over just in time to see Rea Morris deliver a beautiful set. Her vocals are perfect as the sun begins to fade over the Myrtle Park.


Then it’s back to catch tonight’s headliners, James. And as always they fail to disappoint. It seems James have been everywhere this year, and have received rave reviews throughout. Bingley’s performance is stunning. As usual Tim Booth got up close and personal with the audience. A great set that should have secured them with the crown for best act…but more about that later.


Saturday ‘s highlights on the second stage included a wonderfully melodic Meadowlark, followed by Oxfords 4 piece ‘Pixel Fix’ who delivered a high octane performance. Keep an eye on these boys, as they perform some quite brilliant indie tunes. They have been likened to early Prefab Spout. I’m not sure about that but I’m sure I like what I hear.


But it’s the main stage that got my interest. After a D.J. set that got the crowd into a jump frenzy, Ella Eyre takes the stage in a skin-tight one piece that sent the photographers wild. At one stage it resembled a mini mosh pit. Over the last year Ella has exploded on to the music scene. And no wonder. It’s a great performance, that excites the young crowd. Definitely future headlining material and justly deserved.


Ash take the stage and prove that they still have a festival band presence, winning over the audience with a blistering version of ‘Teenage Kicks’.


Labrinth finishes Saturday’s festivities belting out some soulful, feel-good tracks that get the audience moving and grooving. A great end to what was another great day. I’m off to my bed back in Manchester, eager for Sunday’s performances.


Its Sunday.  Vant take the main stage today and are definitely worth a look. They are another up and coming band worthy of more exposure.


They are followed by Nothing but Thieves. After the obligatory three songs in the pit I head back to the press tent to upload some pictures. To me NBT sound like Muse vocally, however they do nothing for me unfortunately. The crowd disagrees as they receive a rapturous applause at the end of the set. Guess I’m in a minority on that one.


I wasn’t too sure how the audience would react to Peter Hook and the Light. Some Joy Division tunes are dark and not really festival pleasers, so this was one act I needed to see. And I’m glad I did. It was a stunning set. It went through my mind how Ian Curtis would have reacted to thousands of people singing along to ‘Love will tear us Apart’ He might be horrified, but today it’s an emotional moment.


As the opening drum beat of ‘Blue Monday’ pumps out of the speakers it’s hard to ignore what a musical heavyweight Hook is. The performance ends with his shirt being thrown into the audience. Two seconds later he receives one back. One very happy fan exchanging shirts with his hero.


His performance prompted a tweet by James, stating that they were more than happy for Hooky to take the festival crown at Bingley.


And so on to the headliners, Super Furry Animals. Sporting white overalls, the welsh psych- rockers pulled out all the stops with a mind blowing performance. Complete with cue cards they gave the best headlining performance of the three days, and ended with the now trade mark furry suit costumes.


Bingley is a serious contender in the small festival circuit. If you have never been, I urge you to mark this one in your to-do list for next year.


A massive thank you to all at Tiny Cow productions. Lee and his team pulled out all the stops to make sure we got the best shots, interviews and up-to -date info during three glorious days at Bingley. His professionalism and dedication resulted in an event that will remain in my memory for many years. Top bloke as well.


To find out more about Bingley Music Festival click here.

Words and pictures by Lawrence Taylor