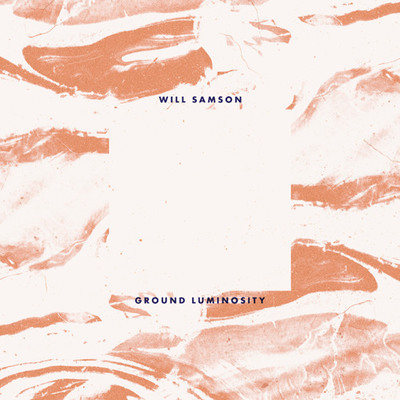 Will Samson hails from Brighton, but chose to record, edit and compile the bulk of his new album ‘Ground Luminosity’, away in not so necessarily sunny locations across Europe, wherein he spent two years lovingly piecing the tracks together.

Will is by all accounts affable and approachable (he happily replied to a question within minutes!). He is also what one could call, “a hoarder”, judging by the content of the videos he has been posting online during the “creative process” as they say.

Pulling from a stash (ok hoard) of old tapes, analogue recordings and “vintage equipment”, he has reversed the adage of out with the old and in with the new. Drawing a pencilled line underneath the past, he has charcoaled in an hotch-potch of found and recorded sounds, extensive percussion and luminous electronica, adding more texture, depth and vibrance, to the ubiquitous ambience.

‘Ground Luminosity’ is a stellar compendium; pieced together like a musical jigsaw puzzle, each track has its place, fitting in perfectly into this carefully woven soundscape. Consisting of eight superbly crafted, diverse but yet complementary tracks, it is as uplifting as it is mindful.

The album opener ‘Tumble takes off with what sounds like a gust of wind, which carries a looping acoustic guitar n synth sequence, via a shower of raindrops, into a river of flowing country-style slide guitar that wouldn’t go astray in Nashville. With the addition of some emo violin, and a smidge of found sounds to tail off, this is a confident start to the album. A soothing, fluid, chilled instrumental this is “gentle on my mind” kind of music.

‘Sunbeamer PT1’ is our first introduction to a vocal and oh my, what a lovely, soft, gentle one it is. Serene, contemplative, reflective, it reflects Samson’s leaning towards meditative mindfulness. With a quivering string component, some quirky, shuddering percussive beats, and recordings of creaky movement (obviously recorded within inches of the mic), this is ambience with a modern electro twist.

Slide guitar can again be heard on ‘Flow, the Moon’. A chirpy, American number, with lots of repetitive guitar riffs taking a wander up and down the fingerboard, a fizz of static, and recorded sounds redolent of waves washing onto the shore, this is a track played with a lot of love and feeling. Throw in some fluttering heartbeats of percussion and this is working a nice instrumental groove, until half way through, surprise, surprise, up pops a vocal, a superb falsetto, backed up by tightly woven light and shade harmonies. ‘Flow, the Moon’ comprises of all those elements we associate with all things lunar and is a seemingly simple, yet highly complex and very well thought out piece.

“I recently found a small box of cassettes containing some very early album sketches, which I had discarded along the way. I had so much fun digging through these old music seeds that I thought I'd share a little snippet. This piece eventually became unrecognisable from what you hear on this tape...complete with distorted guitars, violins, electronics and vocals. Can't wait to share the real thing!”

The title track ‘Ground Luminosity’ is a meld of muddled and fuzzy piano sequences, which sound like Samson has taken several old recordings and layered them mille-feuille fashion one on top of the other, thereby giving it a gorgeous vintage quality. Sparse, minimalist, with light washes of percussion over a constant monotonous thrum, this is luminous by name and nature. Over as quickly as it has begun, this is one for the rewind button.

‘Python Bells’ starts off as a spacious, soulful affair with melancholic sounds and birdlike noises. Chiming bells, found sounds and a noise redolent of coconut shells mixing it up with spoons, wake it out of its reverie. Pulsing electronic beats bring animation countered by po-faced organ like sounds, making this almost hymn-like. Until whack, searing synth kicks the po out the window until it comes to a close with some thrumming guitar riffs. ‘Python Bells’ fully exemplifies the vivid imagination and hunger to explore and experiment which have driven Will Samson to the lengths that he went to piece not only this track, but this album as whole, together.

Star of the album, ‘When I was a mountain’ is another meditative composition. Contemplative keyboard sounds complement a very hushed vocal. Electronic beats and twinkling synth shake it up, all the while under their airy spaciousness, darker undercurrents of sound flow. It is lullaby-esque in its nature until there is a sudden rush of electronica, the calm ripped by bullets and bolts of percussion and flickering background beats. It builds to a crescendo with some high organ sounds and string arrangement both melancholic and uplifting, which his utterly sublime. There is an almost Celtic undertone, which Will (see above) has assured me was not intentional, so it must be my ears playing tricks on me!! This track is like a split screen simultaneously portraying images of War and Peace. It is the most gorgeous fusion of sounds, and if you liked nothing else on this album, for this track alone, it would be worth paying money.

Two tracks close out the album. ‘Suspended In’ is simply divine. An heavenly instrumental which finds you sitting amidst the stars being serenaded by an heavenly choir, singing to a backdrop of stellar strings and wind-like synth. This is what I call, “ambient shoe-gaze”! The album finishes off with ‘Night Canyon’ an hypnotic electronic guitar based ballad featuring nippy percussion and some seriously adept musicianship.

‘Ground Luminosity’ is brilliant in its subtlety, unique for its method of composition, and imaginative in its conception. It is exceptionally well thought out, performed, arranged and produced. For this lover of all things Ebow on the far side of indie pop and Icelandic electro – classical a la Arnalds, Will Samson’s work, for me, lies somewhere in the middle. And for this punter, that is a very, very good place to be. Hats off, 9/10.