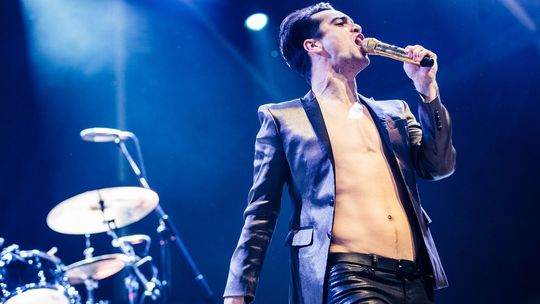 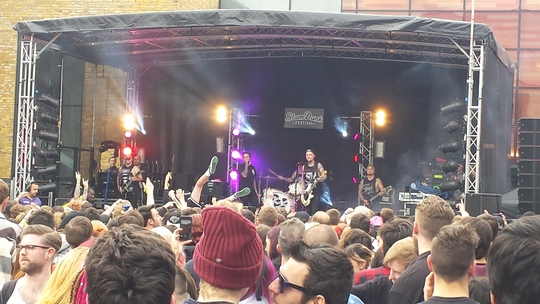 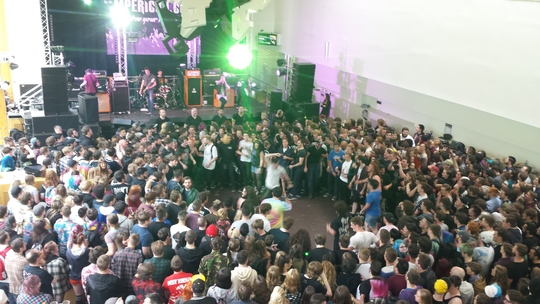 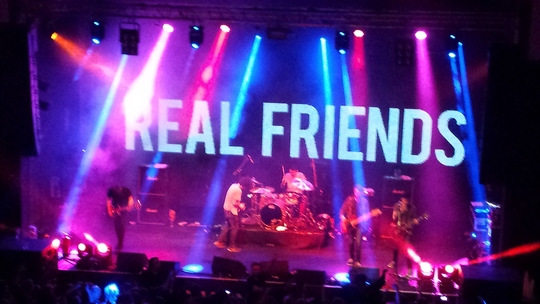 Slam Dunk Festival celebrated its tenth anniversary at the end of May, serving up the best and brightest in pop-punk, metalcore, ska and Brendon Urie-core over the bank holiday weekend. We ventured down to the third and final date – Slam Dunk South, in Hatfield – to celebrate, soak up some sunshine, and yell ‘POP-PUNK’ apropos of nothing (when in Rome…). Here’s what we discovered along the way.

POP-PUNK IS TAKING OVER THE WORLD

During its original heyday, pop-punk seemed like the exclusive preserve (with a few key exceptions) of dudes from the US - using the annual Warped Tour as a springboard to mainstream success or cult fandom. No longer.

There’s been a groundswell of bands emerging on different shores, of late: many of whom are playing this weekend. Eastbourne’s ROAM incite big-ass circle pits and plenty of crowd-surfing with their winningly raw, spiky take on the genre, while Australian newcomers With Confidence thrill a small, but incredibly devoted audience. WC’s sun-drenched anthems, undercut with a certain degree of melancholy, could easily make them the scene’s next crossover champions. Elsewhere Chunk! No, Captain Chunk! keep the security busy, showcasing their melange of sunny melodies and crushing breakdowns to an excitable crowd. It’s not for everyone, but on a day like this you can’t help but embrace the zany Parisians. Parlez-vous easycore?

There’s a strong Aussie contingent at this year’s event, and Hellions are up there with the best of ‘em. Though they’re still relatively little-known, the five-piece’s live show packs a ridiculous punch – fuelled by the bounce, groove, and sheer ferocity of songs like, er, ‘Hellions’. This is hardcore, but not as we know it, and you’d be foolish to sleep on them. Northlane prove a strong draw on one of the outdoor stages, as do The Amity Affliction - though the latter metalcore bunch appear a little muted today. Hopefully upcoming album ‘This Could Be Heartbreak’ will reignite some of their initial fire.

MOOSE BLOOD AND CREEPER ARE ON THE VERGE OF GREAT THINGS

It’s natural to regard bands who’ve been widely hyped with a touch of suspicion – after all, we’ve all seen a million and one fresh-faced acts implode after a brief moment in the sun. Moose Blood and Creeper seem different.

MB open the main stage in triumphant style, opting for rich, emotive songcraft and gorgeous hooks over token bells and whistles. Judging by the sorry-there’s-something-in-my-eye- yell-alongs going on today, even more remarkable things may be around the corner. We’d love to tell you how Creeper come across but we can’t even get into the area where they’re playing (something that tells its own story). It’s a mystery why they’re playing such a tiny room because, judging by the amount of merch being sported onsite alone, their cult is growing by the day.

MORE POP-PUNK? GO ON, THEN…

For all the diversity of this weekend’s bill, it’s clear that pop-punk is on top right now. It’s everywhere you look at Slam Dunk, from exciting newcomers to scene veterans. Real Friends skew closer to an old-school emo sound, with the raw catharsis of songs like ‘Colder Quicker’ going down a storm, while Yellowcard opt to play their classic ‘Ocean Avenue’ record in full.

For the older members of the crowd, it’s an emotional experience – especially when gems like ‘Breathing’ and the title-track get an airing. Violinist Sean Mackin does some backflips too, because of course he does. New Found Glory fare even better, as the sun finally decides to show up. There’s no arguing with the sheer depth and quality of their back-catalogue, as they regale us with infectious anthems about friends, being sad, friends, loss, friends, perseverance and, er, friends. If you’re wondering, they’d still pick their friends over you. Sorry.

LET’S HEAR IT FOR THE DIE-HARDS

Away from the bulk of the crowds, some of the old-guard are tearing things up. Norma Jean are almost 20 years in at this point, yet they still do frenzied, sludgy metalcore with the best of ‘em. They rival Guns ‘N’ Roses for line-up changes so it’s a miracle they’re here at all, let alone turning in such a strong showing.

Cancer Bats have also survived their fair share of turmoil, and threaten to bring the roof down with ragers like ‘Lucifer’s Rocking Chair’. On their day they’re one of the most compelling live bands in the world, and this is most certainly their day. Is there a more likeable, badass frontman on the circuit than Liam Cormier? Probably not, no. Across the site, Set Your Goals make a welcome return to the UK – unleashing all the posi vibes, sugary choruses and right-on social commentary you could ask for. Welcome back, one and all.

The obvious big hitters do their bit today – a slightly reshuffled and mightily slick Young Guns, and consummately professional Mallory Knox among them – but there are plenty of other bands proving their mettle across the Hatfield site. In particular, Hacktivist showcase their unique grime/djent fusion (if the idea of Stormzy fronting TesseracT floats your boat, don’t miss), raging against corruption and getting middle fingers aloft. They fare better than more established mash-up merchants Issues, who struggle with the rising wind, and seem weirdly out of sorts at points. Still, nobody kills it every time.

QUESTIONABLE DANCING! IN A FIELD

Brendon Urie is on fire right now, and not just because he’s brought a shit-tonne of pyro. Whether it’s nailing ridiculous high notes, showing off songs from what is, probably, his strongest ever record (‘Death Of A Bachelor’ doesn’t suck, right?) or striding across the Slam Dunk main stage like he owns the place, Panic! At The Disco’s last man standing makes this headlining lark look easy. ‘LA Devotee’ and a spine-tingling ‘Golden Days’ induce some fancy (and not so fancy, on our part) footwork amongst the crowd, as does an airing of ‘Time To Dance’ – and there’s even a spot-on cover of ‘Bohemian Rhapsody’, just because. As ‘I Write Sins Not Tragedies’ and ‘This Is Gospel roll around, we’re left to reflect on a stellar day of music.