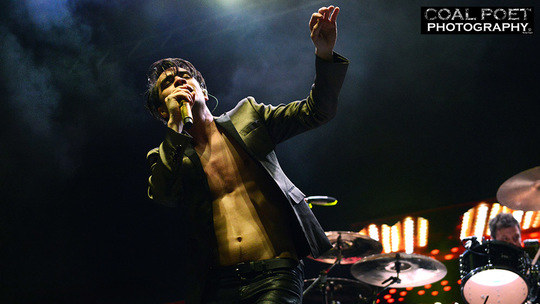 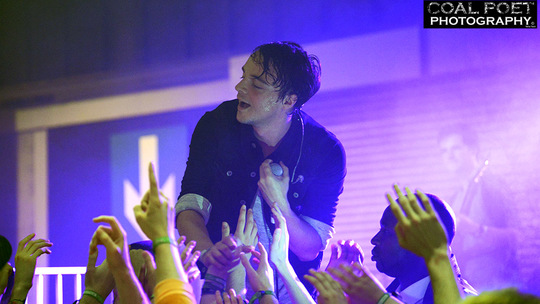 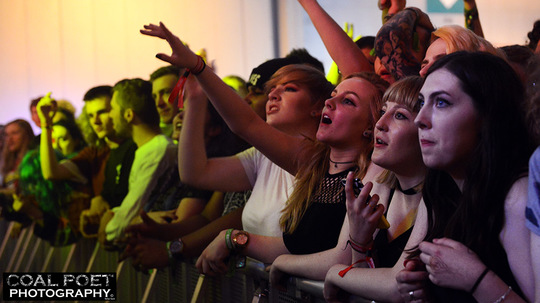 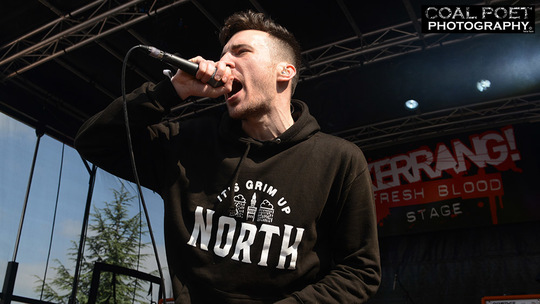 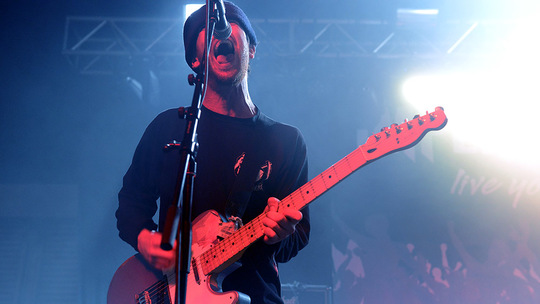 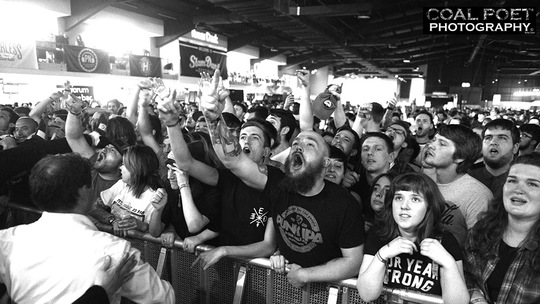 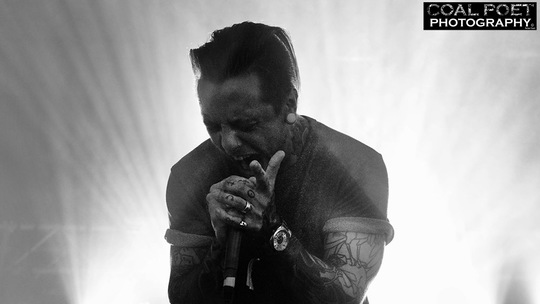 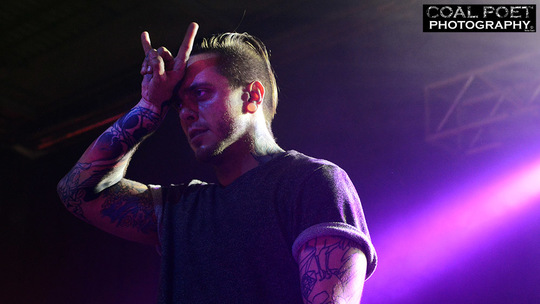 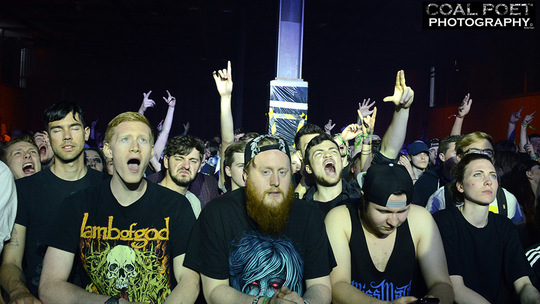 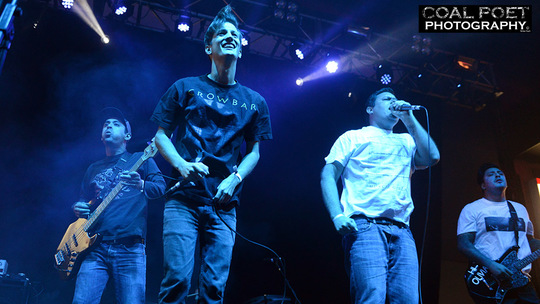 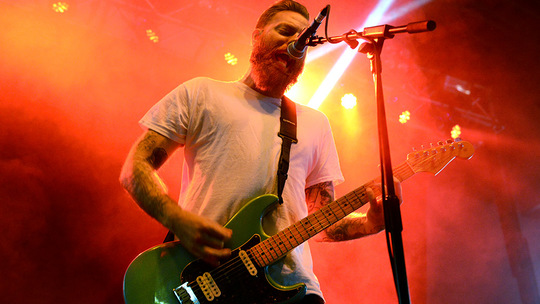 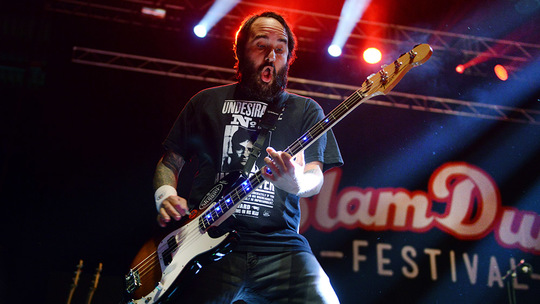 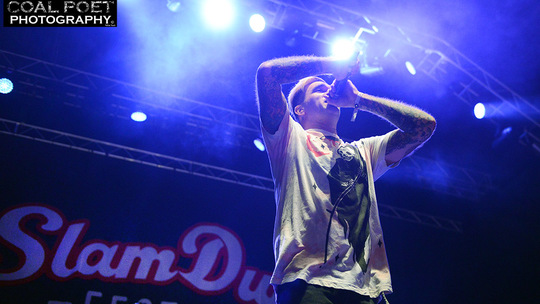 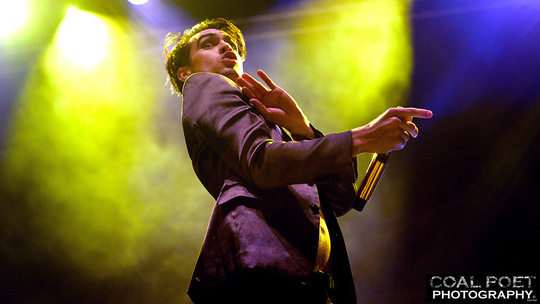 The second leg of the Slam Dunk tour reached Birmingham’s NEC with an enormous line of excited fans snaking from great distances and looping through and around each other, ready to enjoy a long and exciting day of music.

The familiar festival tick list was steadily being marked off as an exotic range of tattoos, piercings, hairstyles and dress codes were on display (including a full Mario Kart team, complete with cloud countdown). Beer and cider cans of all brands lay randomly discarded as the queue progressively diminished, eventually reaching the entrance to awaken inner punkdom.

With a quick exchange of ticket and wristband (followed by a brisk security guard traditionally copping an accidental feel), the entrance from the huge exhibition hall opened up and whisked the enormity of men and women off into the tenth anniversary of expensive alcohol, blazing sunlight and continual loss of hearing.

ARISE ROCKERS OF THE FATHERLAND

Starting off with the Impericon stage, Chunk, No Captain Chunk’s set had people piling up outside the doors.

Even though the capacity had reached its bursting point however, the mass of Slam Dunkers congregating in the line outside sang along to each song regardless, taking extra care of toes when leaping about for their cover of Smash Mouth’s “All Star”.

The majority had made it in for the last few tracks as the front rows bobbed up and with crowd surfers floating over with no direction in a driftwood fashion. Bursts of colour flooded the scene as Poncet leapt to the barriers, embracing the few he could reach and the many that tried to reach back.

Ending their party-hard melody set on the fan favourite, “In Friends We Trust”, a torrent of mosh pits opened in the centre and turned the gentle bobbing into Surfing UK.

GOD SAVE THE SCENE

The English acts of the tour prevailed as time slots came and went, with Harrogate hardcore hitters Blood Youth, Brighton boys Gnarwolves and Milton Keynes Metal heads Heart Of A Coward personifying the ‘Great’ that flows before Britain.

Kaya Tarsus immediately revealed his confidence as the Blood Youth singer, invading the Fresh Blood stage and slapping sick riffs across the faces of their onlookers with the help of Chris, Max and Sam as Thom Weeks’s grunge and grind vocals spread across the Impericon warehouse next, with his brother Max and compadre Charlie Piper forming the Slam Punkers known as Gnarwolves.

Heart Of A Coward presented themselves as the heaviest band to grace the Impericon thus far and as usual, they come out holding nothing back with Jamie Graham unleashing his unnaturally powerful roar, carrying in the maniacal chugs of “Hollow” which proceeded to continue and increase in intensity.

The evening slowly settled in and removed the glare of sun from vision, revealing the dominancy of American artists slowly owning the Key Club stage located indoors. With The Story So Far set to close on the platform, a number of acts were still preparing for their own shows including San Fran Set Your Goals.

“Don’t Let This Win Over You” has Jordan Brown leaping in the air like the stage floor was elasticised and Matt Wilson taking to the front before bottling straight into “Echoes”.

The six piece played nearly ten years worth of material, from power chord punchy “The Few To Remain” to the classic blast beating of “Goonies Never Say Die” which not only failed to mitigate the rising tide of excitement but instead blew it out of proportion. Leaving on “Certain” and “Mutiny!”, the exceedingly satisfied supporters stuck around for another of America’s powerhouse performances.

The high note, on and off mute action of “We All Float Down Here” started up from Alan Day’s Fender and a series of high pitched squeals erupted from somewhere in the massive throng that had gathered for Four Year Strong.

Dan O’Conner and Alan’s familiar call and response vocals remained as ruggedly spirited as they always had been, with the photography pit being evacuated early for fears of surfers crashing down on expensive equipment.

A gentle beckoning given by clashfinders had the majority move to the main stage, where four musicians of high caliber and popularity walked out into the huge capacity arena, ready to issue out an immense allotment of pop punk nostalgia.

New Found Glory decided to sprint head first instead of warming up into the show with a much-loved classic called “Hit Or Miss”, racing through and reminding those who were lucky enough to follow them from the beginning, exactly how essential they were and still are to the genre.

Playing songs from various albums including their latest ‘Resurrection’ through ‘Sticks and Stones’, ‘Catalyst’ and their self-titled 2000 release for the hour long performance, Chad, Jordan, Cyrus and Ian refused to leave one track out that put their title into topic of conversation.

Confetti cannons, pyrotechnics and big back flips were one of few impressive events that occurred during the main stages last act of the night but it was Brendon Urie’s monumental singing range which surpassed them all.

Panic! At The Disco strutted their stuff with intoxicating talent from the smartly dressed Kenneth Harris and Dallon Weekes, accompanied by the steady beat of Dan Pawlovich.

An endless series of highlights included Mona Lisa being chanted in unison with Mr Urie as the limitless production projected stars across the arena roof and blasted flames which took the heat of the show to new depths of searing enjoyment.

Rocketing through the contagious rhythms of their nineteen chosen songs, it was damn near impossible to accuse one of dampening the mood in any way but was a fitting sign off for a perfect anniversary that will not soon be forgotten.