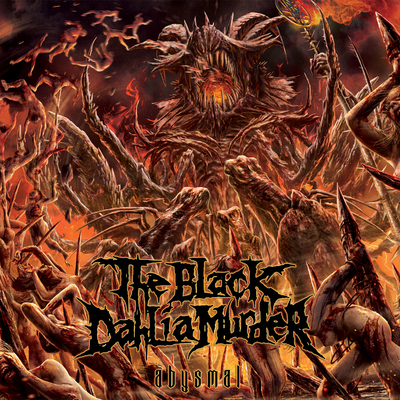 The Black Dahlia Murder have never been an act for the faint of heart and with their endless well of technique practically spewing intensity, even the death metal enthusiasts will have a hard time holding onto their innocence. Personal purgation and groundless damnation breed the maliciously musical love child known as ‘Abysmal’.

With the long term success of their seven previously released albums, the band have built up a pretty impressive back-catalogue over their years as a group, and their new entry to the collection is nothing short of well-structured mayhem.

The gentle yet sinister note of violin string meeting bow opens the album, emanating a haunting nostalgia which is swiftly and instantaneously obliterated by the familiar storm of quick-fire guitar play, and almost mechanical drum work, decimating any hint of a reasonably dampened adjustment to the Michigan-based quintet’s sound.

The line-up alteration over the years from their definitive ‘Nocturnal’ may have caused the hardcore fans to quake in panic, but if this album has done nothing but prove exactly how vital their new members have become to their overall demeanour, then that is more than enough incentive to get it out on the shelves.

“Re-Faced” stands out as the largest motivating force to throw day-to-day problems to the abyss and lose yourself in the wretched ecstasy of Mr Cassidy’s well-placed fills and an experimentation of 2009’s ‘Deflorate’ jacked up on steroids.

“Vlad, Son of the Dragon” on the other hand, is a perfect example of how the aggressive element that resides within their method has been cranked from 11 to run for the fucking hills. Challenging to reach new levels of power, passion and supremacy seems to have become the bands credo when discovering new and inventive ways of shredding your face off.

The lyricism of this piece is not only deeply diverse in content, covering a variety of topics which seem awfully daunting to certain members of society such as the dread of an afterlife, but also has a vividly visual accompaniment through the darkly poetic nature of Trevor Strnad’s writing.

Many artists in their field have difficulty finding that fine line between well-orchestrated finesse and crucial carnage, and with The Black Dahlia’s hell-bent musical presence in comparison with their ominous album artwork (created by the Russian demon of death metal art, Daemorph), the content of their songs makes all the more impact.

‘Abysmal’ walks the path of damnation in the eyes of those who consider the genre ‘unholy’ or ‘upsetting’. To everyone else however, this is open to opinion as The Black Dahlia Murder’s malevolent Mona Lisa.