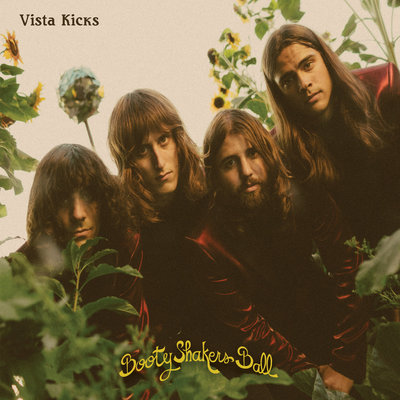 Hollywood based but Sacramento, CA born rock band, Vista Kicks, have released their debut album, 'Booty Shakers Ball' and they could not have picked a better album title. It’s not that often you come across a rock n’ roll band that not only makes you want to pump your fist but at the same time shake your ass!

The 4-some met in kindergarten, so I guess we can assume at this point in their 20’s they have a pretty cohesive vibe going and it shows in every note. This is feel good and have fun rock n’ roll.

They made the move to Hollywood in 2016 and released 2 singles “Circles” and “Make It Real”, the band caught a buzz and in April 2016, they followed up with a six-song EP titled 'Chasing Waves', which garnered them a pretty decent following. They played everywhere and anywhere proving this young, fun unit has a hardcore work ethic. Their debut full-length album 'Booty Shakers Ball' was self-funded through merch sales, gigs and a pre-sale via Pledge Music.

So, let’s dig in to 'Booty Shakers Ball'. Right off the bat, the album kicks in with a very distinct and infectious guitar riff in the song “Gotta Get Away”, the words and music immediately invite you to the Vista Kick’s party and you can’t help but quickly RSVP.

'Booty Shakers Ball' continues with a nostalgic, yet fresh, rock n’ roll tone with traces of influences such as The Rolling Stones and The Sweet, add in a taste of funk and a hint of pop rock, solid musicianship and soaring vocals.
Elsewhere on the new album, on songs like “Giuliana” and “Alice” front man Derek Thomas shows off the soaring and soulful tones in his voice, while bassist Trevor Sutton delivers a booming bassline, accompanied by Nolan Le Vine hyperactive drumming and Sam Plecker melodic axe attack.

The band effortlessly created the perfect mix of playful rock n’ roll and heartfelt lyrics. Maybe it’s because they are lifelong friends, maybe it’s because you can feel they mean it with every note… whatever it is, it will leave you happy, pumped up and eager to put 'Booty Shakers Ball' on repeat.