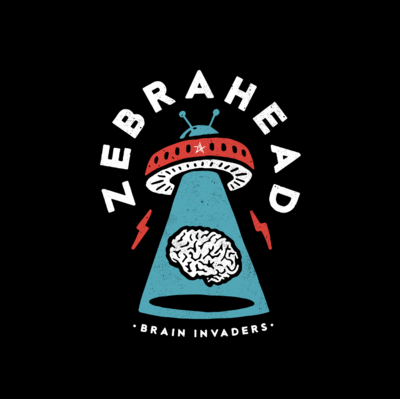 It’s been a long time coming but the party is about to start because Zebrahead is releasing a new studio album. It’s called ‘Brain Invaders’ which fits because the band is known for their infectious AF punk-party songs that will get stuck in your brain. The new album was produced by the band and Paul Miner (New Found Glory, Atreyu, Thrice, Death by Stereo) and mixed by Kyle Black (Pierce the Veil, Paramore, New Found Glory).

‘Brain Invaders’ is an album that is, most importantly, genuinely great, it is sure to appeal to people that have been following the band since the beginning as well as today’s youth. Zebrahead continues to bring a little something for everybody, if you like pop, punk, rock or rap, they seem to be able to deliver them all in a nice tight explosive package.

The fact that the album is so solid and musically accomplished is a testament to the band’s collective age, they have been doing this for a while, but they have maintained a youthful feel that has never sounded so dynamic and fresh. The new material perfectly encapsulates a band that remains at their peak and sounds as confident as it ever had. Spitting out compact punk-pop songs with plenty of balls and even more hooks and still filled with a fistful of unkempt, angst-fueled anthems for the disenfranchised.

With a penchant for arty mischief, their songs are as witty, poignant, and as biting as ever, even as their melodic sensibilities come into greater focus.

It all started with the release of the ‘Yellow’ EP on indie label Dr. Dream in May 1998, the buzz began and Zebrahead signed to major label Columbia and released their full-length debut, ‘Waste of Mind’, later that same year. Their sophomore album ‘Playmate’ of the Year’ hit in mid-2000 to rave reviews and the album's infectious title track garnering airplay on some of the planets biggest alternative stations. ‘Stupid Fat Americans’ EP was released as a Japanese exclusive the next year. Then came the 2003 release of Zebrahead's critically acclaimed ‘MFZB’ that garnered the highest testing alternative song for months running with ‘Rescue Me’, the album went gold in Japan! The band spent the summer of 2006 on the Vans Warped Tour and ‘Broadcast to the World’ was released, and went gold in Japan in just a month's time. In 2008 the band released ‘Phoenix’ with a warning from Absolute Punk “listen with caution as your face may melt right off of your head.” ‘Panty Raid’ followed in 2009, ‘Get Nice’ in 2011, and ‘Call Your Friends’ in 2013.