New Talent & Old Featured At Impressive By The Sea... 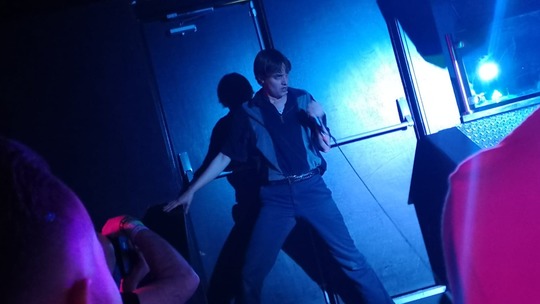 Brighton, May 2019 – The Great Escape saw a dedicated showcase by ‘Impressive By The Sea’ which is part of the musical hullaballoo around the music biz shizz at the annual festival of music and ideas and innovations, The Great Escape. Five acts were brought out - new and old - and we were there...

12.00 -12.30: KROY
Set list: ‘Hull’, ‘Days’, ‘Satin Satan’, ‘River’ and ‘Cold’.
Camille Poliquin is a Canadian electro pop artist also known as KROY (also one half of Milk & Bone), a cool synth pop artist who delivered the first set of the day. Cue a very cool, moody musical synth trip. Very trippy indeed and perfect for those introspective evenings where you want to get lost in music and thought. As it was - it was midday, and it is sad people hadn’t quite arrived to witness a cool and worthwhile artist who could switch your mood through her electro driven synth dreamscapes.
http://www.kroymusic.com/

14.30 - 15.00: Juiceboxxx
Set list included: ‘Never Surrender Forever’, ‘Ripping Up My Soul’, ‘Freaking Out’. ‘Expressway To The Darkness’, ‘Coinstar Song’, ‘Open Up Your Life’, ‘The Edge’, ‘Dead End America (Pagans Cover)’, ‘It's Easy To Feel Like A Nobody When You're Living In The City’.
Juiceboxxx is a crazed animal from Milwaukee unleashed upon us to take us to his very own space! This punk rock/ rap crossover set was truly exciting. The audience was expertly drawn in to almost participate themselves into proceedings as he flung himself about the venue – including the bar and fire doors as well as actual faces and bodies in the audience! This was a crazed energetic performance and you just knew Juiceboxxx was fine-channeling his inner angst through every single track, creating a visceral energy felt by everyone. This was the set to behold. His nihilistic take on being a young lost soul in modern America included his new single ‘Coinstar Song’. It’s all about trying to get by and wondering why you’re alive and consistently analyzing your own self-hatred. In the weird times we live he is the glitch going bezerk in the Matrix.
http://juiceboxxx.com/

15.20 -16.00: My Life Story
Set-list included: ‘It’s a Girl Thing’, ‘The King of Kissingdom’, ‘Broken’, ‘If You Can’t Live Without Me Then Why Aren't You Dead Yet?’, ‘Taking on The World’, ‘Funny Ha Ha’, ‘Sparkle’, ‘No Filter’, ‘Strumpet / Fall In’, ‘12 Reasons Why’.
My Life Story are musical stalwarts expertly bringing it to the showcase. To a packed audience of (clearly) their fans they played a few new tracks from their forthcoming album (out this summer apparently) as well as performing all the crowd pleasers their fans expect punctuated with clever chat and well-honed moves from charismatic frontman Jake Shillingford. MLS are what they say on the tin: professional, snazzily suited n booted – with an expertly crafted set crammed with clever lyrics and catchy melodies. MLS never fail to deliver a solid set and this headline slot was no exception. http://mylifestory.band/