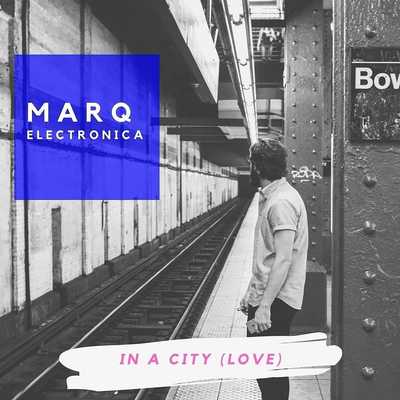 Marq Electronica is a one-man music machine, based in the North-East, UK. Having organised musical events and performed for over a decade now, Marq has mustered the confidence to release his long awaited solo material. With the support of his bandmates and fellow local artists, Marq dived headfirst into his first solo project with the pure funk anthem ‘Get Down and Work It Out.’

Now, his new single ‘In A City (Love)’ proves Marq is as versatile as he is entertaining. This latest track, which dropped on August 14th, is a sad atmospheric electro-pop track with Marq’s trademark funky and electro edge that will make you move your feet while it pulls on your heartstrings. It’s dramatic, sultry and led by tension-building piano, before erupting into ethereal organ-synth layers. In Marq’s own words, “my sound is influenced heavily by RnB and electronic artists from Missy Elliott to Daft Punk, Fever Ray to Goldfrapp and amazing groups like Massive Attack,” whilst Marq’s vocal recalls to mind the greats such as Boy George and George Michael. Indeed, you can totally hear the 80s influences in here, but Marq still manages to keep the record fresh for today’s audience, with his timeless melodic sensibilities. Marq Electronica is an artist who you need to watch live too - rocking his signature shades, he has an effortless style and charisma that never fails to captivate a crowd. And that voice - here, on latest single ‘In A City (Love)’, we hear it in its fullest glory…