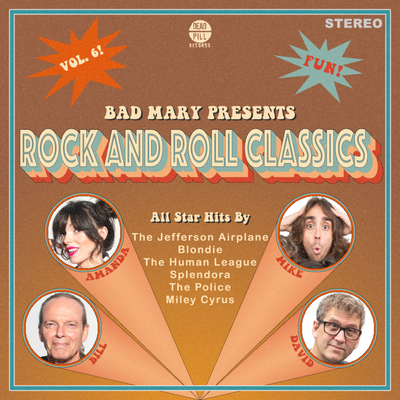 The EP features their versions of Blondie’s “One Way or Another,” Splendora’s “You’re Standing On My Neck” the theme from MTV`s Daria, Miley Cyrus’s “See You Again,” Jefferson Airplane’s “White Rabbit,” The Human League’s “Don't You Want Me,” and The Police’s “Next To You.” An unexpected mix of tracks… well yes. but it makes sense once you find out that the band led by vocalist Mac is comprised of her husband Mike Staub on bass, her dad Bill Mac on drums, and her Hofstra University professor David Henderson on guitar.

The EP contains six rare picks to throw together, but Bad Mary delivers without committing the sin of performing a cover too close to the original and they manage to put a new spin on some classics that you might have forgotten about until now. Some might say that nothing beats the original, but in this case, it’s refreshing to hear ubiquitous songs turned upside down and given a good shake-up.

Bad Mary released their first album, Better Days in 2013 and followed it up with three fast and loud EPs, Killing Dinosaurs (2016), We Could Have Saved the World (2016), and Glitter Bomb (2017). In 2019 they released their latest album, The Return of Space Girl, a 33-minute punk rock space opera, followed by an award-winning animated movie of the album. They plan to follow up the new EP with original single song releases, and a second EP of rock and roll classics with the release of an EP of all-new material.