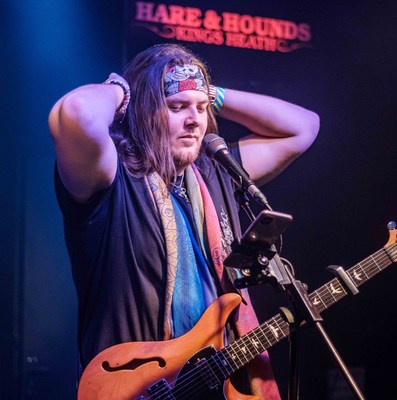 Luis Morrison leaps into the spotlight with his breakthrough single, 'Ultraviolet'. It's a bluesy-rock-driven release with enough diverse styles to appeal to a wide range of listeners.

There's also a rush of adrenaline that comes with uncovering a new artist, and that emotion was palpable when learning about 'Ultraviolet'. He's not a million miles away from the elite and those with more experience, churning out hits left, right, and centre. It foreshadows his bright future, and if he continues down this path, he'll soon be bursting out of stadiums!

With a sweet guitar melody in the opener, 'Ultraviolet' gets its foot in the door, greeting the ears like a warm blanket on a cold evening. Luis Morrison grabs the mic and takes control with his upfront and vibrant vocal delivery as the cymbals brush ahead of a potent drum arrangement.

Luis, a native of Birmingham, manages to stretch his wings far beyond his home turf, almost bringing an American flavour to the forefront of the scene with his production. He has observed some of the world's top performers, and it shows in his delivery, which nevertheless has plenty of unique zeal to help him stand out, even as a newcomer in the game.

In the closing part, the guitar solo slaps me in the chops. It leaves me giddy with anticipation, eagerly awaiting his next release, which will hopefully arrive in the not-too-distant future.

Overall, a solid debut from Luis Morrison and a sign of what is still to come!