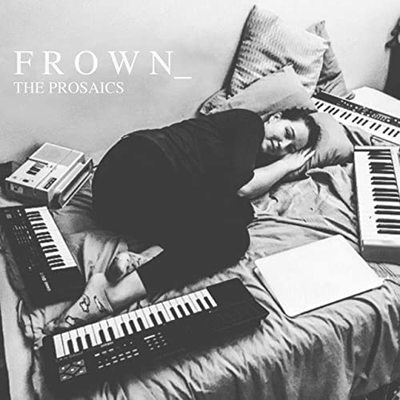 Who could resist the intrigue of a sound described as “a raised eyebrow, a disapproving glance a jog around an amputee ward, a takeaway curry on a brisk walk home, an explicit funeral wreath …” ? Certainly not me. So I check out The Prosaics, aka A.G. Williams new single 'Frown'.

Additionally, and I’m slightly horrified to even share this, Williams resides in the Medway Towns. Myself originating from this neck of the woods, although I made a hasty exit to the bright lights of London many moons ago. Chatham was reportedly the spiritual and literal origin of the Chav, and my only musical loyalty to the grim place thus far remains a steadfast love for The Godfathers. BUT, Do You Remember The First Time? … The first time you heard Pulp? Cocker’s sharply observed vignettes celebrating the hitherto uncelebrated? His uniquely British and quirky lyrical tone? There are parallels to be drawn here. ‘Frown’ is a bleaker stripped down synth-pop, intelligent electro, vocals occasionally echoing Morrissey and an antidote to the shallow pop celebrations of excess and success we are bombarded with on the daily.

A.G. doesn’t want us to turn our frown upside down, he wants us to revel in it, examine it, embrace it. He recorded 'Frown' ‘naked in the dark’, uses antique synthesisers and doesn’t like Ed Sheeran – what more do you need?